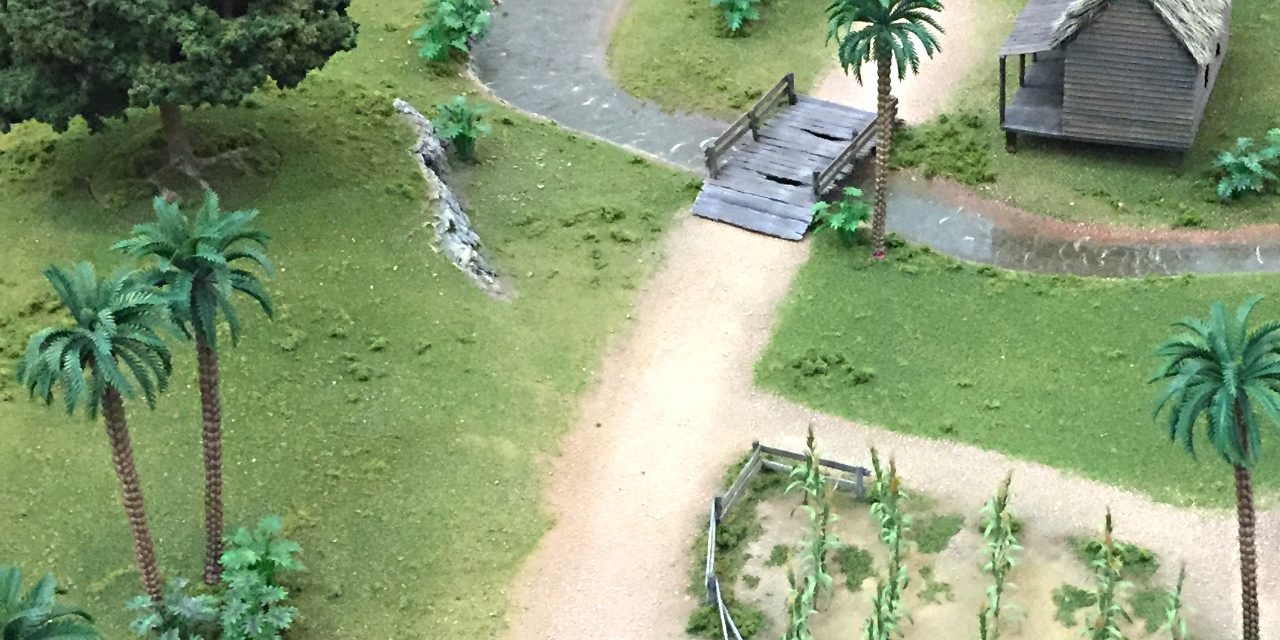 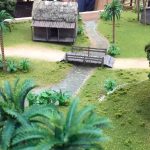 This jungle farm is set in the 17th century and was commissioned for Firelock’s Blood and Plunder historical pirate miniatures game.  It is a 4’x3′ demo board that separates into two pieces.  Unlike the Pirate’s Cove board, this one needed to ship overseas and be able to fit onto an airplane.  When separated, this board forms a crate that is 2’x3′ and 1′ thick.  Is was very similar to that of a large suitcase.  None-the-less, this crated terrain had to be durable in order to withstand that abuse that normal luggage goes through.

The features on this board needed to be accurate to the period while still being visually interesting and playable.  Not only was this to be a bit of a show piece to attract attention, there needed to be a variety of elements on the board the could facility how terrain rules work under a variety of conditions.  So we knew we wanted some building structures, elevation, soft cover, hard cover, and water (both deep and shallow). 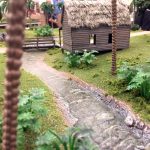 Before the first knife ever hits foam, there was a lot of research in the form of pictures, both for structures and terrain.  We wanted to set this farm inland on a tropical island in the Caribbean.  A lot of our researched showed that farms of this era were most successfully situated in a valley near a stream.  The soil was usually more fertile there and having access to flowing water allowed for better irrigation.

Like the Pirate’s Cove board, all the palm trees were set into the terrain using a brass rod and tube system to allow for quick and easy removal for storage.  All of the smaller plants and shrubs are permanently fixed to the board, include the corn stalks.  The structures are also removable, including the bridge that was strategically placed to hide the water seam where the two boards meet.  In fact, there were several design considerations made to obscure the center seam as much as possible.  The bridge, hut, and two large custom trees, straddle the middle of the board to hide that seam.  Then we made sure that were you could see the seam (in the grass areas), it was so precise that you could barely see it.  If you look closely at the photos you can hardly see it. 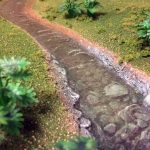 Water features, like the stream, are always a pleasing eye catcher, but two of the stand-out pieces of this board are the large custom trees.  Each tree was painstakingly made using varying thicknesses of wire to create the armature, then the bark texture was added using Apoxie Sculpt.  After the tree bark was painted, the clump foliage was added and painted.  Hobbyists don’t often think about it, but painting the clump foliage will add realism by giving the leaves better scale as well as dimension.

In the end, this board came together quite nicely to give a variety features to look at and play around.